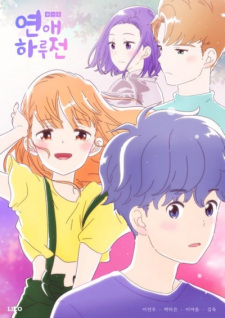 Plot Summary: When Ha Eun takes shelter from a sudden downpour, she runs into someone she recognizes as her classmate. She greets him but is met by a cold shoulder, his curt replies shutting down her other attempts at conversing with him. When the awning above Ha Eun tears apart, she takes cover under the boy's umbrella and accidentally hugs him. Abashed and still annoyed, Ha Eun apologizes as the boy boards his bus. As luck may have it, the two meet again when Ha Eun's university friend, Yeo Reum, invites both of them for dinner. The classmate is introduced as Yeon Woo and turns out to be Yeo Reum's childhood friend. After several drinks, another friend of Yeo Reum escorts him back home, leaving Ha Eun and Yeon Woo alone. The two share an intimate moment devoid of words. Will this be the first of many?

Other name: A Day Before Us; 연애하루전