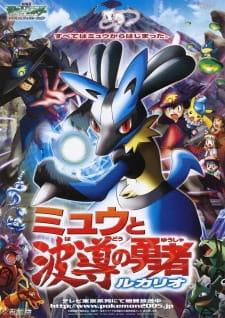 Plot Summary: In the town of Lohta, a festival is thrown praising "Aaron the Wave Leader Hero" who, according to the legend passed down through the town's generations, stopped a war centuries ago by using the power of "the Tree of the World's Origin." Satoshi and Pikachu participate in a battle to decide this year's hero and after their victory, they are chosen as the "Wave Leader Hero." A grand dance party is held in the castle to celebrate the victor, but suddenly the phantom Pokemon Mew appears and takes Pikachu. Soon afterwards, the Wave Leader Pokemon "Lucario" is freed from his centuries-long seal and meets Satoshi. Satoshi must solve the various mysteries of where Pikachu is, what Mew's after, what the secret of the legend of the Wave Leader is and how it ties in with Lucario's hidden past as he makes his way to "the Tree of the World's Origin" with Lucario.